One of the defining characteristics of math is breaking down complex objects into simpler pieces that are easier to study. For instance, we prime-factorize integers and decompose matrices, and in the process gain a better understanding of the very nature of our original objects. In group theory where the objects of study are groups, this question becomes: how do we break down complicated groups into more wieldy ones?

After learning about Lagrange’s theorem and how subgroups partition groups into the original subgroup and its cosets, a natural idea might be to leverage this to break down groups. For example, take the subgroup H={0,2} of Z4​ and its coset 1+H={1,3}. By reorganizing the Cayley tables, we might end up with something like this:

If you squint, you might see something that resembles the Cayley table of Z2​, where instead of the integers 0 and 1 we have the cosets 0+H=H and 1+H. And just based off the clumped Cayley table, there’s a sensible operation ∗ to “combine” these cosets to give another coset:

Similarly, we can combine these cosets with ∗ to produce another coset2:

This time, the cosets didn’t form tidy clumps! In particular, if we take H and try to combine it with (123)H, we find that

Before we answer that question, I want to present some intuition that’ll guide us in arriving at the answer–an answer that always felt a little arbitrary to me otherwise.

DEFINITION. An element x is said to be “y-like” if and only if x=yh for some h∈H.

We saw that not all groups satisfy this requirement and so don’t create a group from the cosets. But this requirement is a little hard to work with since it requires us to check if all combinations of the cosets, and when they have different coset representatives. Instead, it’d be great if there was some logically simpler condition that guaranteed aH∗bH=abH for free.

Of course, the usual identity is double-sided. If elements of H are truly identity-like, we might expect them to fulfill this duty faithfully. So we’d like that if we right-multiply g by some h∈H, that produces something g-like as well. In other words, if we left-multiply g by every h∈H to get all g-like elements, they better be the same elements we get from right-multiplying g by every h∈H. In the language of cosets, this condition becomes gH=Hgfor all g∈G. At a glance, this condition4 seems a lot simpler to work with since we don’t have to check combinations of different cosets. And as a it turns out, the coset operation aH∗bH=abH is well-defined if and only if this condition gH=Hg for all g∈G holds5.

DEFINITION. A subgroup H is normal if and only if gH=Hg for all g∈G.

DEFINITION. A quotient group is the set of cosets G/H={gH:g∈G} with the operation ∗ defined by aH∗bH=abH for all a,b∈G, where H acts as the identity element and each coset has an inverse, namely g−1H.

When I first learned about normal subgroups, they were special subgroups that satisfied gHg−1=H. While a logically equivalent statement (and easier to work with when it comes to showing a specific subgroup is normal), it just felt like some random symbolic coincidence. But by observing that H ought to act like the identity, the equivalent condition gH=Hg became more natural. Further, this intuition of H being identity-like extends well to an overarching understanding of quotient groups. You’re breaking down a group by modding/quotienting out the information that you consider to be “just enough like” the identity–i.e. information and detail you don’t care about!

In the first example above, we quotiented Z4​ by H={0,2}. We considered 2 to be “just enough like” 0 because what differentiates 0 and 2 in Z4​ is irrelevant to us in Z/{0,2}. Both 0 and 2 are even, so all we care about is parity, which is also why the quotient group resembles Z2​. In the second example, we didn’t care about the specific permutations, but again just their parity by considering even-transposition permutations (123) and (132) “just enough like” (). As a result, the quotient group resembles Z2​ with cosets A3​ and (12)A3​.

Equipped with these ideas, we can now tackle an important theorem that deals with quotient groups, called the First Isomorphism Theorem. But first, there’s a bit of terminology to introduce. Our process of clumping elements into cosets to map one group to a smaller, less detailed version is actually part of a larger pattern of mapping between one group to another, not-necessarily smaller group. Let’s give this process a name.

If we’re mapping between two groups (G,∗G​) and (Gˉ,∗Gˉ​)6 with some function f, we’d hope that f preserves the “groupiness” of G, namely that f

It turns out we can derive properties 1 and 2 from 3, so we’ll restrict our attention to 3. Since the functions that satisfy property 3 preserve the “groupiness,” or structure that makes groups interesting, we’ll give them a name: group homomorphisms. Also, since the notation gets cumbersome, let’s drop the group-specific operations from property 3. Just keep in mind they are from different groups.

DEFINITION. A group homomorphism f between groups G and Gˉ is a mapping that preserves the group operation, i.e. f(ab)=f(a)f(b) for all a,b∈G

Now given this definition of a group homomorphism and what it does–preserve the operation–you might notice there’s a pretty natural way to understand the “identity-like” intuition from before. If f(b)=e (the identity of Gˉ) for some b∈G, then f(ab)f(ba)​=f(a)f(b)=f(a)e=f(a)=f(b)f(a)=ef(a)=f(a).​ Here, b seems to act like the identity under f exactly because f maps b to the identity. As far as f is concerned, it is the identity! Now zooming out, we’ll want to talk next about the set of all the elements in G that map to the identity, which call the kernel of the group homomorphism f, denoted kerf.

DEFINITION. The kernel of a group homomorphism f are the set of elements of G that f maps to the identity in Gˉ, kerf={g∈G:f(g)=e}.

<sidetrack> With this definition, allow me to detour a bit to tie this together with the intuition from the previous section. Consider the homomorphism from G and its quotient group G/H for some normal subgroup H given by ϕ(g)=gH. You might notice this is exactly the function that clumps elements into cosets now in symbols. You can verify it is indeed a homomorphism with the coset operation ∗.

Now observe that for every element h∈H that ϕ(h)=hH=H, and H is just the identity element of the quotient group. Conversely, if some element g∈G maps to the identity, ϕ(g)=H, then gH=H and g∈H necessarily. Thus inclusion goes both ways and kerϕ=H. So, a normal subgroup H that we hand-wavingly said before contained all the elements that are “identity-like” can now be formalized as exactly the elements that are the identity under ϕ, exactly the kernel of ϕ! In fact, we give this map ϕ that formalizes our natural intuition a name: the natural homomorphism.

Given that gkerf is all the elements that are g under f, they should behave exactly like g under f. That is, they should all map to where g is mapped, namely f(g). You might visualize this with colors: 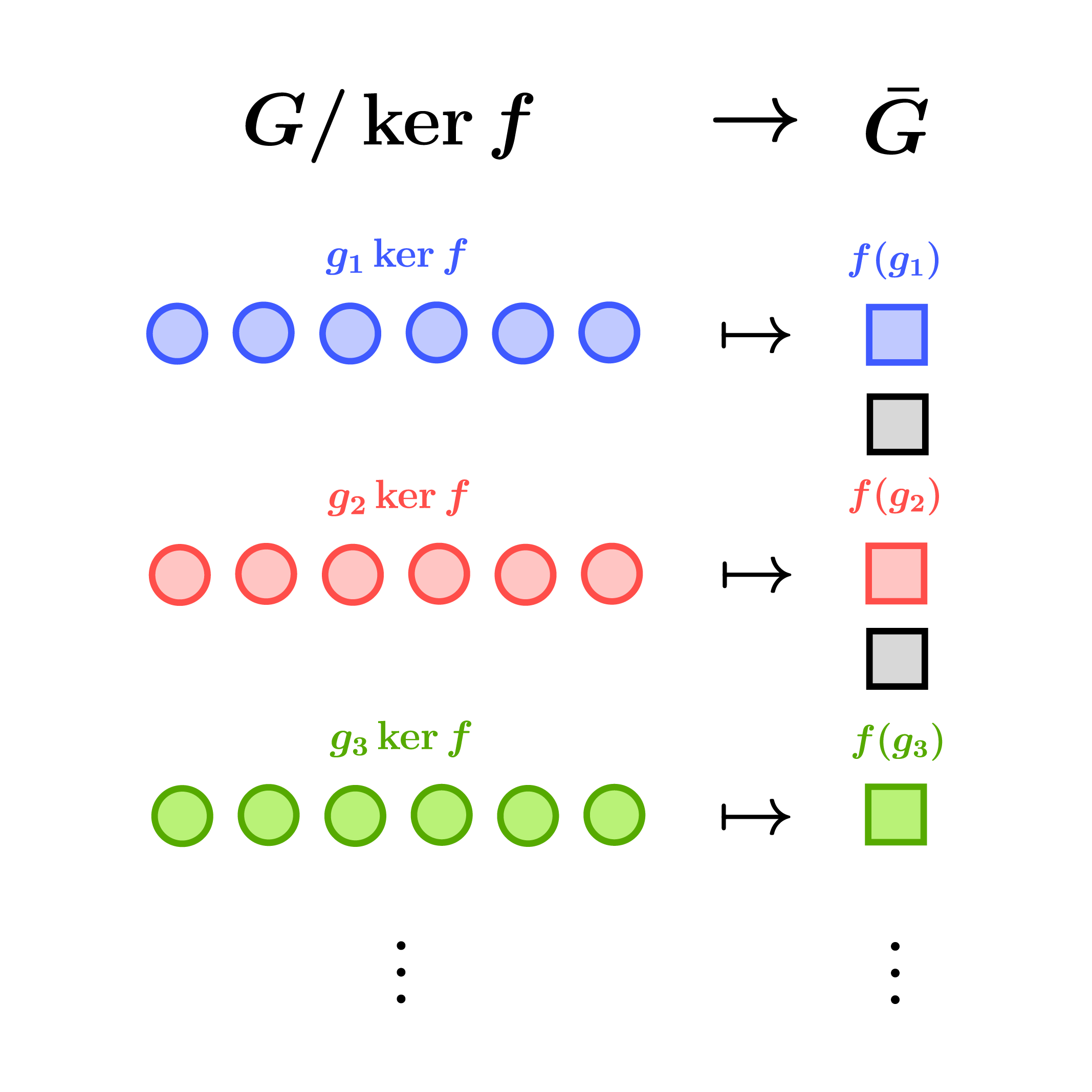 Notice how G/kerf splits G into clumps of elements that are all the same under f. Accordingly, these clumps all map to the same element in Gˉ. Doesn’t it seem natural that there would be a one-to-one correspondence, and specifically in the context of groups, an isomorphism, between the clumps of colored circles on the left and where they map to colored squares on the right? That’s exactly the First Isomorphism Theorem! It states that,

THEOREM. Let G and Gˉ be groups and f:G→Gˉ be a homomorphism between them. Then G/kerf≅f(G), where f(G)={f(g):g∈G} is the image of f under G. Explicitly, the isomorphism is given by the map gkerf↦f(g).

Further, notice that because f is a homomorphism, that all of Gˉ need not be hit, or in other words, we could have f(G)​=Gˉ. In our picture, there are potentially black squares that are not mapped to, but those don’t concern the First Isomorphism Theorem. All it says is that G/kerf is isomorphic onto the image (all the colored squares) of f under G, and that should feel natural!

For the sake of concreteness, let’s apply the First Isomorphism Theorem to an example. Consider the homomorphism f(x)=xmod4 from Z to Z4​. Then kerf are all the multiplies of 4, since they are equivalent to 0mod4. Now consider the quotient group Z/kerf=Z/4Z. There are only four cosets in this quotient group, namely 0+4Z,1+4Z,2+4Z, and 3+4Z since it is cyclic. And of course, by the First Isomorphism Theorem, we know Z/4Z≅f(Z)=Z4​ when we map the coset 0+4Z to f(0)=0mod4=0∈Z4​, the coset 1+4Z to f(1)=1mod4=1∈Z4​, and so on. We’re just mapping the cosets to their representatives mod4, i.e. under the homomorphism.

Finally, in the spirit of milking this intuition for all it’s worth, we can also motivate ideals–what we get when we generalize the notion of normal subgroups over rings. Suppose we have a ring R and we want to break it down into a smaller ring. We can first construct a smaller group by considering the additive abelian group (R,+). Since it’s abelian, every subgroup I is normal and we know R/I={r+I:r∈R} is quotient group. Now, following intuition from earlier, I consists of elements that are identity-like, i.e. 0-like, in (R,+). Of course, then we would expect that rI⊆I and Ir⊆I for all r∈R, since left- and right-multiplication by something 0-like should yield something 0-like. This motivates the ideal, which absorbs multiplication.

And it turns out this ideal condition, that rI,Ir⊆I for all r∈R, is exactly necessary and sufficient to define multiplication on the quotient R/I, such that we can create not just a quotient group, but also a quotient ring.

Hopefully some of these ideas and intuitions helped you digest what motivates quotient groups and normal subgroups, and how they can be applied and extended. They’ve helped me immensely in internalizing these concepts and how they generalize to other objects, like rings and varieties. Stay tuned for next time, where I’ll (most likely) talk about the rest of the isomorphism theorems. Oh yes–there’s more!